Add to Fav Rate 0 stars   Assign   Assign
Close
Login as parent/teacher to assign this.
Common Core
Quiz size:
Message preview:
Someone you know has shared Rotational Symmetry quiz with you:

What did you think of Rotational Symmetry ?

A figure has rotational symmetry if it can be rotated about a point less than a full turn and look the same as it did before the rotation.

The order of rotational symmetry is the number of times a figure looks the same as it did originally when it is rotated through 360°.

For example: Consider this figure.

If we rotate it one-half turn, it will look the same. 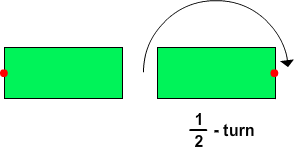 So, it has rotational symmetry.

Also, observe that when the figure is rotated through 360°, it looks the same two times.

So, this figure has rotational symmetry of order 2.

For example: Consider this figure.

The order of rotational symmetry of this figure is 1.