A symbol for a number whose value is not known.

This is called a variable expression.

The answer depends on what number the variable (x) stands for.

When you know what it equals, you simply substitute it into the expression and find the answer.

Finding the value of algebraic expression

This statement says to add 5 to whatever x equals.

Since x = 3, simply substitute 3 in place of x in the given expression. That means just replace the x with the number 3.

Whenever a number and a variable are written right next to each other with no space in between, this means multiplication.

So this statement says to multiply 9 by whatever n equals.

Since n = 2, simply substitute 2 in place of n in the given expression. That means just replace the variable n with number 2.

Can we write our own variable expression from a statement ???

You can write your own variable expression from a statement. You need to think about what the statement is saying and then translate it into mathematical expression.

Here are a few key words you must remember :-

Take each word and translate it to math.

A number means a variable. Let's use x.

12 more than a number in mathematical form is :

Or, you could also say x + 12 since the order does not change the sum.

A number decreased by 2.

Translate each word to math.

A number means a variable. We'll use n this time.

subtracting the variable by 2.

A number decreased by 2 in mathematical form is : 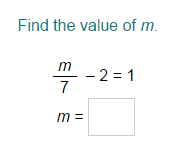 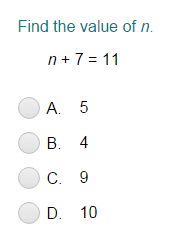